Calling them meeting minutes gets a little dull.  But if you want to know whats happening with Lidl Planning or a devious thief in B&M/ALDI or whether HS2 building has started, it is all below!

The meeting was joined by South Ruislip SNT Sgt James Wright.  Discussed recent crime figures with concern over burglary and car crime.  Assaults put down to police recording of even playground scraps where informed.

Burglary the police feel there are two teams operating on the area, one has been disbanded with arrests made and they are working on the second.  They are working in Thames Valley and the Met mixing this up with vehicle crime.

Theft of personal property also high due to retail parks.  Police disappointed B&M and ALDI are not paying for security.  Local police targeting a prolific female thief in B&M/ALDA, with thefts “almost daily”.  Sgt Wright suggested not taking whole bag there only credit cards which can be replaced with little loss.

They are working on the robbery in Victoria Road.  The perpetrators left behind vehicle forensics and items dropped which have created a number of leads for the police but they are waiting on those forensics results.

Have planning consent at committee on the 11th January.  They are discharging planning conditions, agreeing S106 and 278 highway works. The next stage for confirmation of the build is from the Mayors office/ GLA an then Hillingdon will give Lidl formal confirmation.   Approval is expected and they look to start on site April and open by Christmas.

Question regarding S106 spend.  Henry Neel suggested looking online for full report on planning website.  But the exact details of the planned costs are still being agreed with London Borough of Hillingdon officers.

Plans for the site can be found here.

Thank you to Lynne Kauffman for organising with distribution of this month’s newsletter with various members of the committee and to the Road Stewards for their delivery.

Handed over with fit out expected by May.  Small delay caused by a power cut.

Developers hope to host an open evening event, which we will make open to SRRA meeting attendees, if we can.

Sid keen to look at the cinema as it built so following that closely.

Citygrove has purchased a sculpture which they will unveil.

Bellway housing opening on a different timescale.   The walkway to open linking to Station Approach as the commercial site opens.
7.0          HS2

Looks like it will go ahead.  Work to start at the end of the year.  HS2 forced to reveal data on housing purchase and compensation deals to make a more level playing field for people.

Need to dig up for sewers on Long Drive/Station Approach/Bridgewater Road/West End Road.  Concern the work will take a couple of years rather than just months.  The impact will be massive as Allan pointed out to parliament at HS2 hearing.

Linda typed up the minutes from the last meeting of Community Voice and we will circulate.  [Secretary – see the post here]

Update from Allan and Lynne Kauffman.

Now organised by Dettie Quirke (who is running youth centres across the borough) who is actively seeking to regenerate activity for local children and aim to get the children back in with a series of targeted activities.  Open evening there tonight.  Youth workers will be full time over summer holiday.

“The centre is gradually starting to come back to life.”

On a day to day basis four youth workers at the moment.  Lynne Kaufman confident in roving care taker, Bill who looks to take pride in the centre.

Seeking Youth volunteers.  Dettie Quirke will come and talk to us at a future date.

After hearing a rumour from Sainsburys staff at SR that the store might close, Sid rang the David Mills Property Manager who said that it was a good store, trading well and not closing. Sid asked him about improving the store, and offered some suggestions and he will hopefully come back to us.

From Cllr Allan Kauffman.  Looked with officers at the parade as the area looks poor compared to the modern Dairy Development.  The trees to be pollarded or replaced and new pavements with more trees and seating.  Lots of planters by the railings and modular flower display – possibly paid for my SRRA.  Price set to be around £200,000.  Paid on S106 and TFL funds. Should happen in this year.

Concern expressed that once work done it will be dug up again and ruined by work such as HS2 and ARLA in the area.  Sid said that contractors would be obliged to return the site to the same condition.

Good Christmas lights next year.  Asked for green, white and red rather than colder blue and white ones.

Bridge works. Plans drawn up to clad the brickwork, with a higher walkway and better lighting.  Taken up with TFL.  Cost is circa £350,000.  Allan to continue to work on this.

Positive response to road changes at the junction of Long Drive and Victoria Road but request for better signage and consideration for speeding the southerly route onto West End Road from Station Approach.   Discussed difficulty in doing that and the knock on effect of heavy traffic and poor road layout at the Target roundabout.

Cars on Victoria Road, concern with parking both sides of the road.  Looking at changes to either one side of the road or both.  Likely to lose trees but will replant.

Aware of planning and councillors aware but it is not on planning schedule as yet.  Concern re overcrowding in the area.  Ex-Fireman expressed concern about buggies etc left in the stairway as it is a means of escape route and should be clear at all times.  Councils responsibility under the regulatory reform order.  It’s a protected route.  Allan said he would follow this up with enforcement officers.

Buying flowers in the parade on Long Drive, Sid asked in the Florist about the chamber of commerce and said that the response was so enthusiastic he was greatly encouraged.

Next meeting of the Chamber in Feb. Plenty of space for meetings without over reliance on the Ramada.  We support and Sid will attend a future meeting. Sanjay chair been trading for 30 years in car repair and we know he is very keen on the area.

Historically disruptive to neighbours.  Not so bad last year.  Revitalise efforts and awareness amongst police and Hillingdon council officers when close to festival season.

Corsa being sold from the area.  Illegally running a business.  Plan to block the area with no parking between 10am and 12am to stop vehicles being left there, such as the van advertising the hand car wash which does not seem to have moved in 5 years.  It is also bad for the nursing home at Brackenbridge House.  Parking changes have gone to consultation.

Road resurfaced, part of this is due to work by David Seaman campaigning.  Needs bollard placing to stop cars cutting through in a somewhat dangerous fashion.  This element to be done at residents cost by a resident builder.  Resurface work paid for by the Chrysalis fund.

Keen to stay with rest of Ruislip rather than split off with Ealing wards and Hillingdon area.  Lady wrote asking what is happening.  We await the Boundary Commission’s recommendations in due course but it will take a while as due to affect 2020 elections.

From Cllr Teji Barnes – Watch out for scam emails which contain promises of tax refunds.  Such as this one. 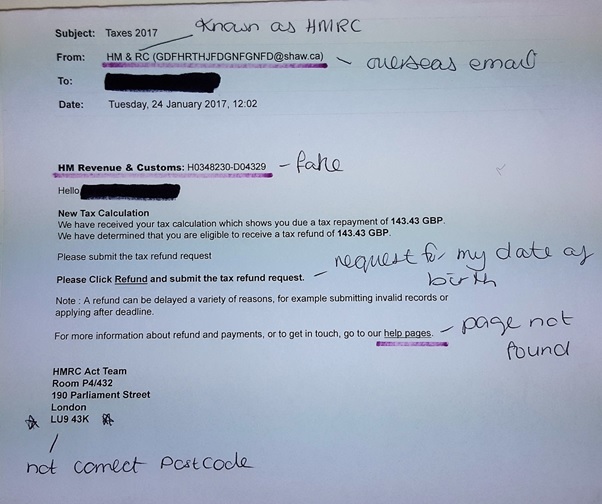 Allan Kauffman – Bought by a worship group in 2013.  They put in a change of use to change to worship use and a retail use below.  A tiler currently works below.  This was refused for numerous reasons, mainly as an industrial area not for worship.

If they got planning permission it would add traffic and block the road.

[Secretary : It sounded like the application was not formally refused for change of use.]  They’ve also set up marques and events (non-permanent) which we would expect them to hold license for to operate.

Sid wanted to know what they could put in a petition against Lidl who is trying to act correctly legally and they stopped planning (albeit temporarily).  Can’t the council refuse the petition because it comes from a body operating illegally? Why are planning enforcement officers not following this up on it?

Cllr Lavery spoke (as a councillor who chaired the planing committee meetings).  They were presented with a  valid petition (which just needs 20 Hillingdon residents signatures to be valid regardless of anything else) at the meeting but it was never considered or explored as Lidl agreed to make changes to the plan to move things around.  However the committee can only rule on the proposition that is presented not one changed.  Thus the planning decision was deferred.   The meeting did not get further to consider the decision.

Lidl  came back with a revised scheme.

The councillors will follow up on the Columbus House site.  “It is being actively followed up on.”

Thank you for the tea and coffee and the all the help getting the newsletters out.

Next SRRA Quarterly meeting is the AGM Wednesday 26th April 2017