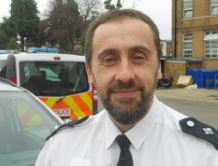 Many changes afoot for the structure of the police service here in Hillingdon and further afield with reductions in senior management posts as boroughs are merged.

Rob explains this clearly as ever!

Police have discovered an iPod nano attached to a cash machine being used as a spy camera to steal PINs from unsuspecting members of the public.

Thieves had taken the small iPod, which is an old version that is no longer sold, and used its built-in camera to spy on the cash machine’s keypad. It had been crudely shrouded in a small plastic box and attached to the cash machine with sticky tape.

It also included a small plastic piece attached over the slot where cards are inserted, which was designed to snare bank cards and stop them from being ejected.

This would allow fraudsters to return once the customer had given up and retrieve the card themselves, which they could then use because the camera captured the associated PIN.
Crafty devices designed to steal your credit card information are getting increasingly compact and difficult to spot, with the latest “razor thin” models able to slip totally out of sight inside the card slot.

Good article in The Telegraph on this subject.

ribute the SRRA newsletters ahead of the Quarterly meetings which take place in January, April, July and October each year. Please find at the link below the October 2014 SRRA Newsletter.  Much has moved on as we discussed at the meeting on the 22nd October. Time, tide and South Ruislip wait for no man. October 2014 Newsletter

Please note the next meeting is on the 21st January 2015 not 28th as mentioned in the newsletter.