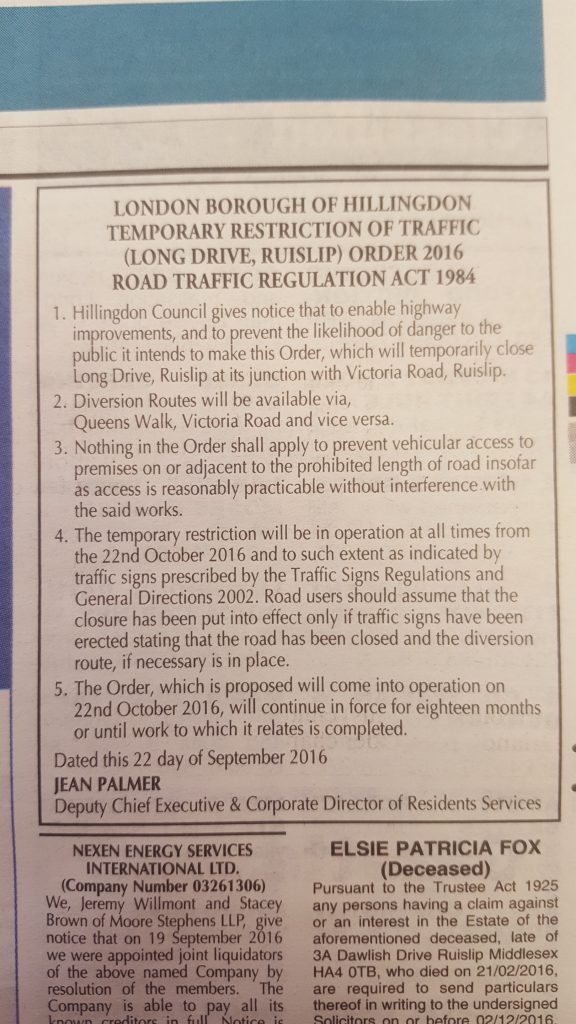 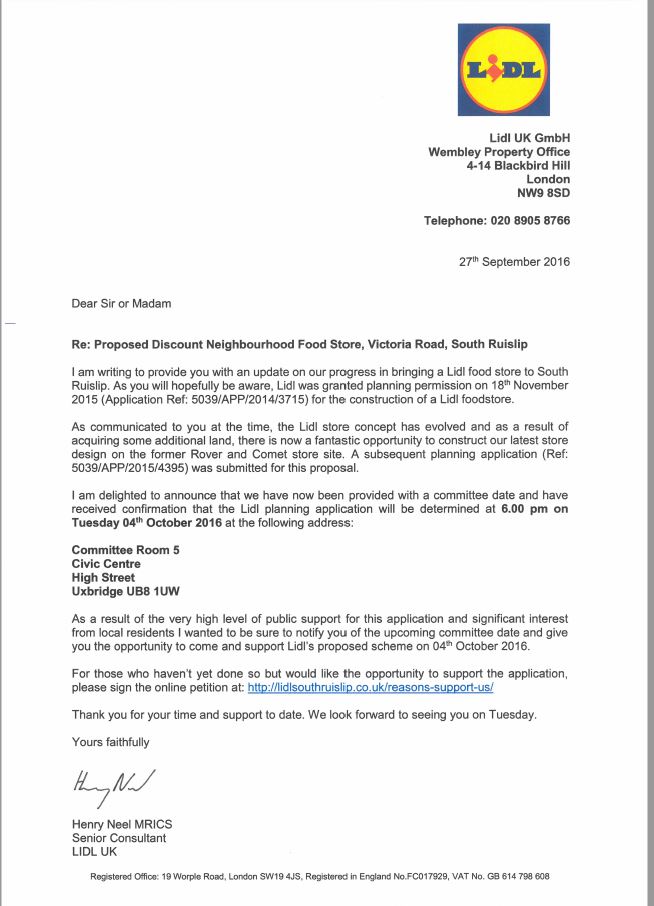 After some delays they are going in front of the planning committee on the 4th October 6pm, Committee room 8 at the Civic Centre in Uxbridge.  Either for or against the proposal you are welcome to attend the public meeting.

This concerns the junction outside the new B&M Homestores / Aldi, with the work ongoing.  This Facebook post from Brian Dazley sums up the issue and Brian’s concerns… 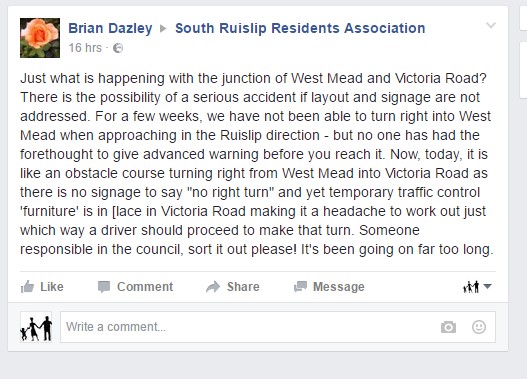 We have approached our local councillors… here was South Ruislip Cllr Judy Kelly’s follow up to council traffic officers.

“I received the attached email today complaining about the confusing lay out of the junction of West Mead with Victoria Road.and I would totally agree with the comments

When these plans were first drawn up and shown to local councillors Cllr. Kaufman and I booked an appointment with the traffic officers to object to the ‘no right turn’ out of West Mead.  We pointed out that as there is already a ‘no right’ turn coming from Long Drive it would turn many of the side roads into ‘rat runs’ as they would become the only means of turning right into Victoria Road.

At this meeting it was agreed that although the traffic lights were to be moved it would still be possible to make a right turn out of West Mead yet it is very unclear how to do this as there are obstacles straight in front so one has to drive partially along the wrong side of the road before getting onto the correct carriageway.  it is indeed a very dangerous situation.  Can this be rectified as a matter of urgency please.”

We will feedback as we hear more, however if you have concerns it is well worth also phoning the council 01895 250111 and leaving feedback for them on this issue directly.  The more people that contact the more likely they are to reply urgently.

Minutes signed off.  Item 3. Pedestrian access.  Walkway to be open when the commercial site is opened for access from Long Drive.

Update from Ward Sgt James Burgess. Many moves in the Safer Neighbourhood Team (SNT) for South Ruislip.  Insp Rob Bryan has been promoted to Chief Inspector in charge of SNT’s.  Sgt Burgess has three constables, new and all keen and adept.  Sgt Burgess has been in the police for thirteen years. Mostly in neighbourhoods.  Ward Sgt for 8 weeks.

Complaints about Field End Rd, Paddock Road, drug use.  3 drugs arrests including 70 wraps of heroin.  Also cannabis.  Also complaints in The Fairway.  Vehicle and knife seized.  Sgt Burgess said that they were successes as a result of information from residents, so please inform the police.  They want more information.  Personally to the SNT, by dialling 101, twitter and email. Don’t mind the route, just get them the information about local criminal activity.

Burglary figures.  In May, 11 down to 2 in June.  In a recent case a burglary was started, the alarm went off and the burglar was scared away by alarm.  First break in for a while.  The message from the police is take sensible precautions and reduce your risk.

One gentleman asked about cycling on pavements which Sgt Burgess explained was an issue he was hot on.

Discussed children riding on bikes recklessly in Queens Walk and Mount Pleasant.  Cllr Kauffman mentioned Kings College as a good diversion for attention and hinted at plans for South Ruislip for BMX course/skateboarding and things of that ilk. “Watch this space”.

No plans to reopen the satellite police station on The Runway in South Ruislip.  But plans locally to improve visibility of police by walking in the ward. Aim to be on the ward for shifts including on late shifts up to midnight.

Brackenbridge.  Issues with kids on motorbikes.  The police have seen this as well whilst walking in parks near West End Road and Bridgewater Road in the field.  Comments that they were gathering in White Butts.

Complaint about a noisy motorbike in the area.  Details taken by the police.

Round up of recent occurrences.  There are two thousand people on the unit.  The looked after the spare for Marine One which was brought in by C17.  They have been involved with Exercise Griffon Strike in Cornwall, taking senior MOD and ministers there via helicopter to watch the drill.

Keeping them most busy – flights for Senior Ministers and Royal Family.  Parliament in recess so a little quieter.  But there have been a lot of short notice flights recently.

Also they site the two helicopters for London Air Ambulance.  Their flying times are limited by sunlight.

Lasers.  Being shone on planes are a risk to the sight of pilots.  There are hotspots for lasers use in Field End Road and Long Drive.

Wingfield Way.  Hedges cant be cut at the moment due to nesting season.  Not cut April to July.  Can do it in August and they will do.

The station was awarded Station of the Year by RAF Benevolent fund, for raising funds, £53,000 for this charity and raised £230,000 in a year for all the charities.

Questions about a quirky and noisy plane which was identified as a Piago airplane.  Belongs to Italian air staff.

Comments that there are a lot of helicopter movements at the moment.  The RAF representatives said they felt the number of movements for them was low, but there the base has a helicopter lane route over RAF Northolt.  Apart from exercises not many there really.  Just fly over head.

Maintenance on runway to take place in the next two years.  But waiting and don’t know when.  It will close for 6-9 months for fixed wing aircraft.

Comment from the floor about Project ARC meaning RAF Northolt could take up to 50,000 movements at year. 12,000 cap per year is the remit subject to ministerial approval.

Operational tempo meant that the RAF Northolt open day is a staff only event.  However in 2017 the idea is a community open day so there will be a focus on local people getting tickets rather than plane/RAF buffs.  They will advise more at the next RAF/community meeting.

Thanked the Road Stewards.  Vacancies for Exmouth Road (40) Queens Walk (22) West End Road (12).  Discussed Lanyard’s.  The lanyard was the expensive part of the fit out.

Mahlon Avenue & Hardy Avenue did not receive a newsletter from Kate.  Discussed the routine of the newsletters going out.

Geoff reiterated the need for up to date list of houses and the roads.

Roads to resurfaced Brackenbridge Road, Abbots close, Down Barnes, White Butts and Stafford Road.  Next challenge is the pavements.  First is Long Drive.

Green Flags – most awards in Hillingdon in the country.  Awarded to parks for amenity and trees. Very proud of Hillingdon’s Green spaces and this award.

Bridge at South Ruislip Station Approach: Looking for a proposal from officers to improve the immediate area of the bridge, passed to TFL for £350,000.  Ruislip Manor work cost £11 Million.

Complaints about weeds on Rydal Way. Sent photos to Cllr Judy Kelly.   Comment on weed sprayer on a quad bike, being done at speed so possibly ineffective.

Complaint about bridge and pigeons at Ruislip Gardens.

Lidl will be on major planning on 24th August.  Recommended for approval. Watch for the details on the website.  One of the issues was with Benson’s for Beds delay as an island in the car park.  Plan to open by end of March next year

Cited to open one week before Easter.

Shopkeepers in The Fairway complained about spaces being taken up being used for spoil. Parking spaces to be returned for customer use from Allan.

Have started the road widening.

Action Alliance against HS2.  Cost currently £55 Billion.  Spent £1 and a quarter billion with nothing to show for it.  We believe part of Europe wide high speed rail link, but this idea is broken in London anyway.  Expected downturn in the economy and so anti groups are hoping HS2 might be a casualty.

Lynne Kauffman, Editor of the SRRA Newsletter has mentioned that her church at Eastcote Methodist Church are organising a coffee morning on Saturday 1st October ten till twelve, for Macmillan.  The church is one of the lovely buildings in Pamela Gardens.

Amazing company – especially if you join us!!”

If you are there for a coffee and a cake, it might be a good chance afterwards to take a quick walk round Eastcote House Gardens which is very close and might help to burn off a few cake based calories.  Only lived in South Ruislip for seventeen years and not got round there myself yet!

Anyone who has had support from Macmillan will know their fantastic work. 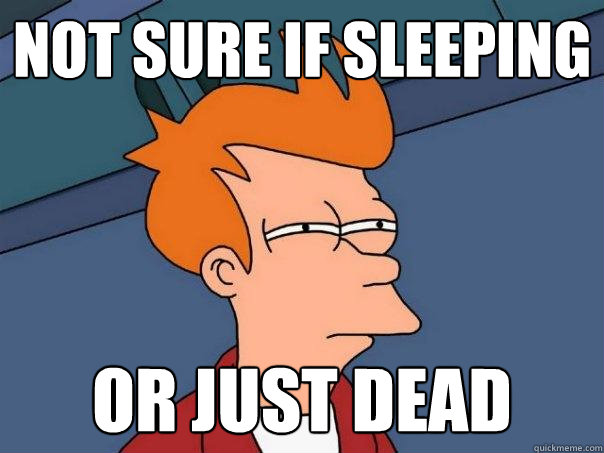 This is the kind of post that dying websites make.  You see it so frequently on blogs.  Months pass since the last post and then one which says yes we are back and going to post on a regular basis, and that is normally made three years ago with nothing else added!

We have had technical issues with the site after a change of hosts was forced on us after a data back up failure.

But those are now past us (that will put the kiss of death on it!) and we look forward to sharing the SRRA news with you!